Positive Noise - Give Me Passion EP 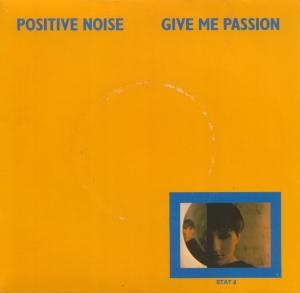 
Positive Noise were a New Wave and Synthpop band from Scotland who had a number of indie hits in the 1980s. They released three albums and several singles and were together for over five years.
The band was formed in 1979 by Ross Middleton (vocals), his brothers Graham Middleton (keyboards, vocals) and Fraser Middleton (bass guitar, vocals), Russell Blackstock (guitar, vocals), and Les Gaff (drums).        Their first released material was two tracks ("Refugees" and "The Long March") on the Statik label compilation album Second City Statik in 1980, and they followed this with two singles on Statik in 1981, both of which were top-ten hits on the UK Independent Chart. Début album Heart of Darkness was released in May 1981, after which Ross left ot form the short-lived Leisure Process, with Blackstock taking over on lead vocals. Heart of Darkness peaked at number four on the independent chart, and the band's second album, Change of Heart (1982), also charted, reaching number 21. They released a third and final album, Distant Fires, in 1985, now with John Telford on drums and John Coletta on guitar, but their earlier success was not repeated and they split up shortly afterwards.
Ross Middleton went on to work as a music journalist, writing for Sounds under the pen name Maxwell Park.