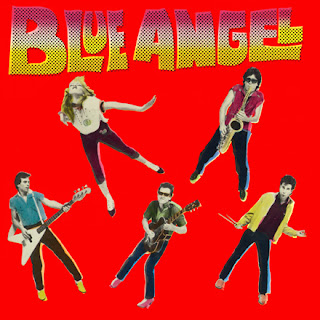 
Blue Angel was a retro-rockabilly band that featured Cyndi Lauper before her rise to fame as a solo singer. The lineup also included John Turi on keyboard instrument and saxophone, Arthur "Rockin' A" Neilson (guitar), Lee Brovitz (bass guitar) and Johnny Morelli (drums). Lauper and Turi wrote the bulk of their material, and the group also covered pop standards, such as Mann/Weil's "I'm Gonna Be Strong" (which Lauper covered again in a 1994 album). Blue Angel was briefly popular on the New York club scene.
The band reformed without Lauper in 1987 under the name "Boppin' the Blues". Lauper joined them on stage for a one-time performance at New York's Lone Star Cafe. The band has since disbanded completely.

Their only album, the self-titled Blue Angel, was released in 1980. It featured a sparse punk rock and New Wave-styled cover in primary red and floating band member photos. The sales for the album were more successful overseas than in America. The only track to achieve high chart status was "I'm Gonna Be Strong", which reached #37 in the Netherlands. Another song from the album, "Maybe He'll Know", was rerecorded by Lauper on her second solo album, True Colors, in 1986.
In 1980 Blue Angel recorded a second album for Polydor that was never released due to a change in management at Polygram Germany; they, along with other artists, were dropped from the label. The band continued to gig around New York until 1982 with their final concert that fall at Studio 54.