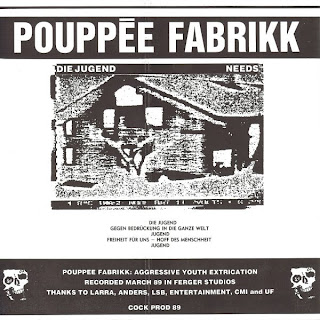 
Pouppée Fabrikk is a Swedish EBM band, started in 1988 by Henrik Björkk and Leif Holm, who both hail from Karlskoga.
Initially, the music of Pouppée Fabrikk (PF) borrowed heavily from minimalistic electronic acts such as Deutsch Amerikanische Freundschaft and Nitzer Ebb, but with the addition of Jouni Olilla and Jonas Aneheim on guitar PF moved towards a more Die Krupps-style electronic/metal mix. The "Your Pain - Our Gain" CD was meant to be released in 1996, but due to differences in opinion between the band and the record company (Energy Rekords) it was delayed until 1999. In 1996 the band decided to take a break and PF was put on hold and the band members worked on various solo projects.
In 2000 the band re-united for a gig at the Tinitus Electronic Festival and announced that they were making a comeback and returning to their roots. They released a four track mini CD entitled "Elite Electronics". A year later though, both Jouni and Henrik left the band to concentrate on their respective solo careers. PF disbanded shortly afterwards. After seven years of absence from the scene the band reunits in 2009, Christian R filling the place of former member Jouni Ollila. In October 2010, they once again re-united for a gig; this time at Bodyfest on Fryshuset.