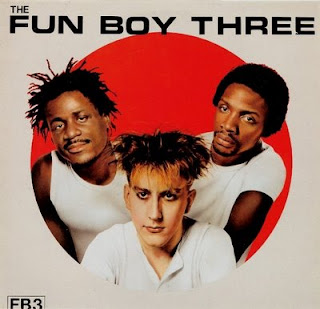 A1 Sanctuary
A2 Way On down
A3 The Lunatics Have Taken Over The Asylum
A4 Life In General (Lewe In Algemeen)
A5 Faith, Hope And Charity
A6 Funrama 2
B1 Best Of Luck Mate
B2 T'Aint What You Do (It's The Way That You Do It!)
Featuring – Bananarama
B3 The Telephone Always Rings
B4 I Don't Believe It
B5 Alone

Fun Boy Three were a short-lived but successful English New Wave Pop band which ran from 1981 to 1983 and was formed by singers Terry Hall, Neville Staple and Lynval Golding after they left The Specials.
They dispensed with the darker, moody sound and demeanour which they and Jerry Dammers had crafted with great success in the ska revival of the late 1970s and went into a much brighter, poppier phase with this new band, though maintaining savagery and wit within the lyrics and Hall's wholly expressionless persona.
Together, they set about making music which covered a variety of genres. The band enjoyed six UK Top 20 hits, including "The Lunatics (Have Taken Over the Asylum)" and "Tunnel of Love" and created two albums of which the eponymous Fun Boy Three was the most successful.
The trio's last UK hit was "Our Lips Are Sealed" from the album Waiting, co-written by Terry Hall and Jane Wiedlin of The Go-Go's, who had scored a U.S. hit with the song a year earlier. They then toured the United States and split afterwards.
They were also credited with helping launch the career in 1982 of Bananarama, whom Hall first saw in The Face magazine. The three women provided credited chorus vocals on the hit "T'ain't What You Do (It's the Way That You Do It)"; the Fun Boy Three later sang on the Bananarama song "Really Saying Something".