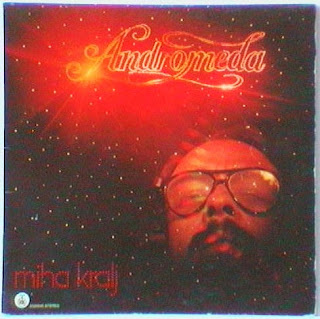 Miha Kralj is a slovenian keyboard player. Pioneer of instrumental synthesizer music in Yugoslavia.
He used to be in a group called Dekameroni, sort of one-hit-wonder band in Slovenia, they spawned a hit called Sava Sumi (written by Miha), which was covered several times during these years (originally it was recorded somewhere round 1970, sounded like Procol Harum).
Then he was in a band called Prah (Eng.Dust). They had few hits like Urska, Balada, Sezona senc and Halo Natasa (this one is from 1980, I believe).
His solo career is described quite well above. Only wider recognizable tune from these 3 albums is actually a song called Andromeda (being used during the 80s for live coverages of Planica ski-jumps).
Later on (mid 80s) he collaborated with a band called Black&White, playing keyboards on their biggest hit Prisluhni skoljki (written by Mr.Jani Golob). It was main theme from some teenage Flashdance-like Slovenian movie. It also sounds like being written by Moroder.
Afterwards his only moderately successful song was called Zemlja klice SOS. Now, he's reported being dance club musician, occasionally entertaining together with ex-singer from a group called Moulin Rouge.
Saso
(Taken from Saltyka.blogspot.com)