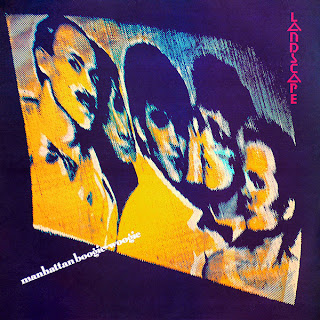 
Landscape is a British band, best known for the 1981 hits, "Einstein A Go-Go" and "Norman Bates". Formed in 1974, they toured constantly during the mid- to late-1970s, playing rock, punk and jazz venues and releasing two instrumental EPs on their own Event Horizon label. They began experimenting with computer programmed music and electronic drums in the late 1970s making records in the emerging genres of electronic dance music and synthpop.
Landscape comprised Richard James Burgess, Christopher Heaton, Andy Pask, Peter Thoms and John Walters.
Burgess produced Shock and the first two albums by Spandau Ballet while still in Landscape. He went on to produce recordings by Five Star, King, Adam Ant, America, Colonel Abrams, Kim Wilde and many others. He has written a book The Art of Record Production, and co-designed the first electronic drumset the Simmons SDS-V.
Walters (aka John L. Walters) went on to produce records by Swans Way, Kissing the Pink, Twelfth Night, The Mike Gibbs Orchestra and Mark Springer. He co-founded Unknown Public in 1992. He is also the author of several articles on the lyricon. He has been the editor of Eye, the international review of graphic design, since 1999, and writes about music for The Guardian.
Pask co-wrote the theme music for the long-running British ITV series, The Bill.
Thoms later appeared on Thomas Dolby's 1984 album The Flat Earth and toured with Dolby that year playing trombone. He is currently a member of staff at The Musicians' Union's head office in the UK.
Following the release of Landscape’s third and final album Manhattan Boogie-Woogie the band became a trio, composed of Burgess, Pask, and Walters. Renaming the band Landscape III, they went on to release the singles "So Good, So Pure, So Kind" and "You Know How to Hurt Me".

Landscape were formed in the mid 70's and released two independent releases before signing to RCA Records in 1979. The band were pioneer users/experimenters of the changes in music technology at the time, utilising computers and electronic drum kits etc. The band released 3 albums and enjoyed a worldwide hit single with the incredibly catchy ‘Einstein A GoGo' in 1981… The first UK reissues of these two influential albums by electronic pop pioneers, Landscape.
Manhattan Boogie-Woogie is the third and final album by Landscape and was released in 1982. It is the only Landscape album that does not include any instrumental tracks.